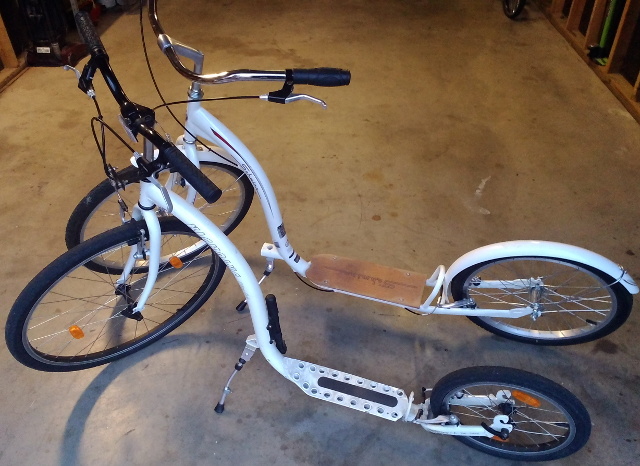 Note: I removed the fenders and basket from my Kickbike City G4 for a sportier look. The Kick Bike City G4 is in the front, and the Schwinn Shuffle is in back.

I had been a recreational cyclist for a long time but got to thinking about weight-bearing exercise later last year (2016). This led me down the path of looking for something equally fun (and comparably paced) but weight bearing in nature.

Enter the Kick Bike. I recalled seeing a cross between a bicycle and skateboard during my college days. I had no idea what it was at the time (and had honestly forgotten about it) but after a little online research, I discovered that what I saw all those years ago was a kickbike of some sort.

Earlier this year, my mother (who was intrigued by my stories about the Kickbike) ended up purchasing a Schwinn Shuffle (model number S5808AZ). Since my initial research, it had become available again. During my last visit, I took the Shuffle for a spin (and measure), which provided an opportunity for me to ride and compare (or review) the 2 bikes so I figured I would share my thoughts.

Side by side comparison

Note: These are approximate measurements (within 0.25" or 0.6 cm). There are slight conflicts with the manufacturer’s specifications in some cases. 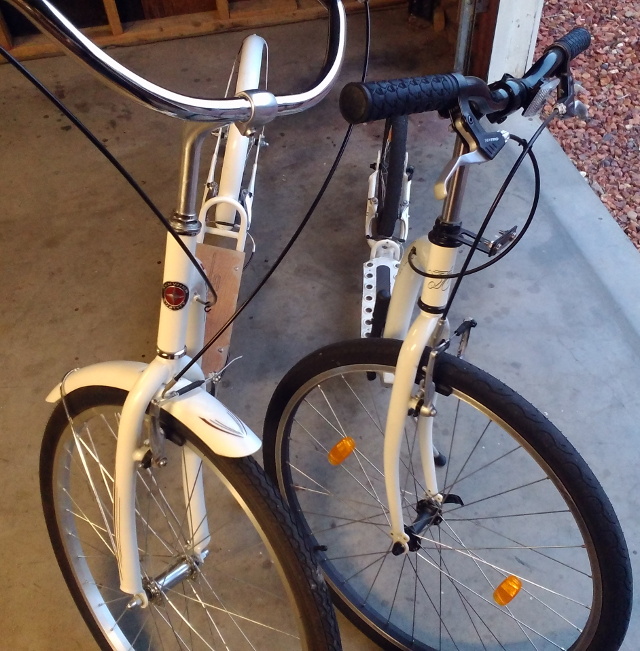 I have minimalistic tendencies, so in hindsight (had the Shuffle been available or had I been more patient), I would have likely purchased the Shuffle over the Kickbike. My only hesitation (had I known) would have been the height of the foot platform.

The Shuffle would have certainly addressed my exercise needs and likely provided a better workout (more energy expended over a shorter distance, albeit with more knee strain). Since I had no standard for comparison, I am guessing the height of the foot platform would not have been as big a factor.

That said, I ended up purchasing the Kickbike City G4 and am very pleased. I would not give up the G4 for a Shuffle, even if I could recover the difference in cost.

Whatever you decide, be safe and have fun kick biking! You will love it.