Sometime during the summer of 2021, a handful of my non-critical Power Automate flows mysteriously stopped running. In reviewing the affected flows, I received only a cryptic “Activity suspended” message. Although it is no excuse, I was pressed for time and did not think much of it. I found that I could “run” the flows manually as follows: Test Flow -> Automatically -> Trigger with the most recent item in Gmail.

I recently had cycles to investigate the root cause of the “Activity suspended” message. Much documentation suggests that excessive API utilization or other usage-based limits are the cause. My situation was more interesting! The common thread with my “broken” flows was the Gmail connector and the FTP and SFTP connectors. Editing the existing flows did not produce any error messages, BUT creating a new one with similar logic resulted in a meaningful error message:

In brief, Microsoft entertained changes to Google’s security and privacy policy at some point during the summer of 2021. As a result, many flow actions and connectors cannot be used in the same flow as the Gmail connector, provided that:

Microsoft describes that in the Using Gmail connector with consumer Gmail accounts section of Known issues and limitations for the connector. However, the list of “current approved services” in the article is (was?) not 100% accurate. When I discovered the anomalous “Activity suspended” behavior, FTP and SFTP connectors were listed as “approved.” 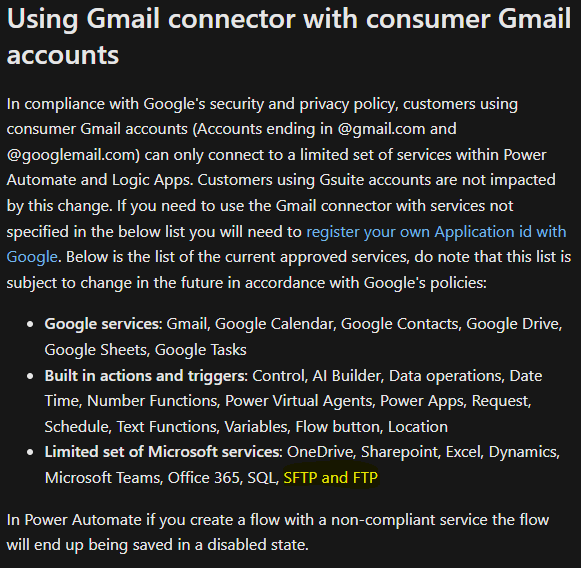