I have been a casual rower for many years (centered around maintaining fitness level, not competing). Combining that and the beautiful New Mexico climate, I had been eyeing the Rowbike for more than a decade. However, the cost was always prohibitive. This year, I finally found a used Rowbike 726 King in my price range and executed the purchase (without thorough research - more on that later). Now that I’ve “rowled” a few times, I figured I would share my first impressions and some tips/modifications I made to improve the bike.

As noted, I did not thoroughly research the “726 King” Rowbike before purchasing. This is an older model (introduced around 1999) so in my defense, not a lot of documentation still exists. As it turns out, the “King” part of this model refers to “king-size” - as Rowbike elegantly states it in their comparison:

… For Our Larger Riders: This model is ideal for rowers that are between 6 foot 2 inches or taller or for more experienced riders …

Unfortunately, I am neither 6 foot 2 inches (1.88 meters) or taller nor an experienced rider. In terms of the learning curve, I suspect those affected my experience! Like riding a traditional bicycle that is too large, the Rowbike 726 King presented me with some challenges. I felt a little like I was riding a 60-inch (152 cm) Penny-farthing bicycle! The Rowbike 720 “Sport” may have been a better fit.

That said, the Rowbike 726 King is a blast to ride. The bike is FAST compared to my Street Rambler (outdoor elliptical bike). After some tweaks and practice (more than the prescribed 5 minutes), I can now comfortably operate the Rowbike and enjoy its fitness benefits, even though it is oversized for me.

Many of these observations focus on making the Rowbike 726 King more accessible and useable for shorter riders. Since I am just slightly under the recommended height, minor changes made this possible (I am 1.80 meters or 5 foot 11 inches for reference). For a rider who is 1.62 meters/5 foot 4 inches (example), I do not think this gap could be closed as easily.

The first thing I noticed about the Rowbike is that the steering appears reversed. As an example, with the power bar flat (resting position), turning the handlebar right turns the front wheel left. This is normal and nothing to worry about. When riding the Rowbike, this steering configuration is natural and smooth. It has to do with how the power bar moves while rowing (steering ends up being more “up and down” vs. “side to side”).

Back in my mountain biking days, I seldomly (if ever) used the super-low “granny” gear. The trails I rode never called for it. With that in the back of my mind, I tried to learn to rowl, starting in the Rowbike’s second gear instead.

In hindsight, I believe that was a mistake. The first gear (large 34-tooth sprocket) on the Rowbike makes it much easier to get going from a stop. It takes a bit of force to get going in second gear. As I was learning to ride the Rowbike, the extra force inevitably caused me to veer to one side (adversely affecting my balance).

Starting in the lowest gear clears up this issue - it takes very minimal force to get moving (albeit slowly). For me, this translated to less tendency to veer to one side or another and better balance. In my opinion, getting moving on the Rowbike (from stopped) is by far the most challenging part of the learning experience. Once in motion, the bike mostly balances itself.

To that end, I have also found that the faster I go, the better the Rowbike balances. My other mistake while learning to rowl was not shifting up as aggressively as I should have. It took some practice and time to acclimate, but I managed to develop a feel for shifting. It is different from a traditional bicycle; the Rowbike sort of masks the effort level, so I now always err toward shifting to a higher (harder) gear sooner than I would on a regular bike.

The seat on the 726 King is HUGE in my opinion (width: 36 cm or 14 inches, thickness: 6.5 cm or 2.5 inches). It could easily accommodate Rikishi (old-school WWE reference). Because of this (and the size of the 726 King in general), my standing foot did not touch the ground without me sitting off to one side of the seat. That in turn adversely affected my ability to balance.

Luckily, I’ve had a Stamina ATS Air Rower 1399 in my home gym for many years. That model has a much more reasonably sized seat for my frame (width: 30.5 cm or 12 inches, thickness: 5 cm or 2 inches cushioned/padded, closer to 2.5 cm or 1 inch compressed) with the added advantage that I am accustomed to it already.

I swapped the seats, and the Rowbike 726 King is more manageable for me now. My feet reach the ground without sitting off to one side, and I suspect I effectively removed ~5 cm (2 inches) from the height of the bike. The mechanics of the swap were easy - I just unscrewed the brackets from each seat and re-mounted them on the other (replacing the machine screws with wood screws on the Stamina bracket). 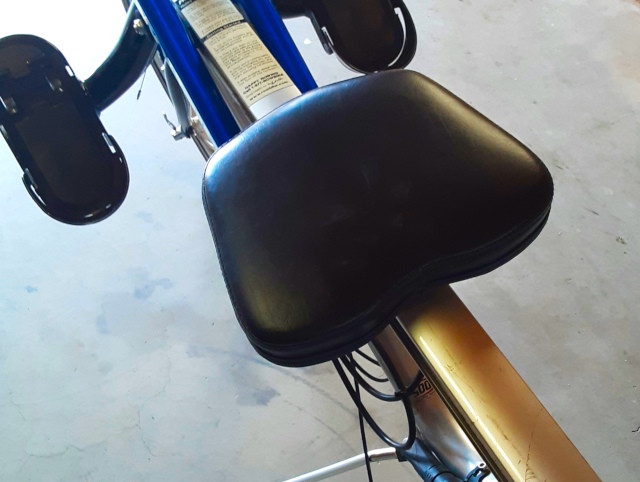 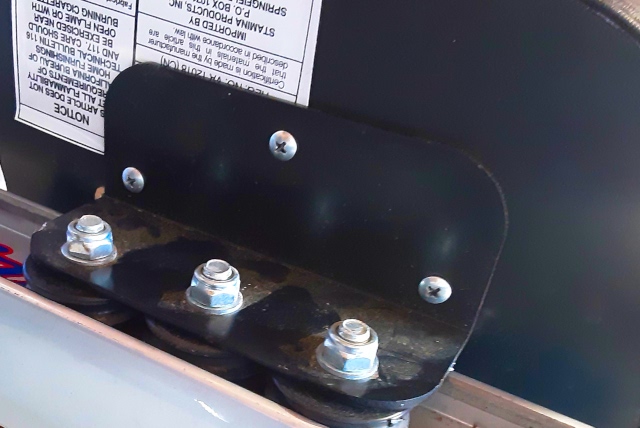 If you are in a similar situation but do not have a rower to swap seats with, you can order the Stamina 1399 seat as a replacement part for $15 USD (at the time of writing) by calling 1-800-375-7520 and requesting Part Number: 66 with Description: Seat.

The stock gearing/shifting on this generation of Rowbike is a little wonky. I suspect this is part of why the later models use an Enviolo (NuVinci) CVT rear hub instead of a traditional freewheel and derailleur. I have read that many Rowbike owners have successfully performed the NuVinci swap on older bikes as well. The Enviolo hub is a parking lot item for me at this point - mostly because I just purchased the Rowbike and prefer not to spend more money on it just yet.

A more balanced freewheel (something like the IRD Freewheel Cyclone Mark 1 7SP) may be a short-term/low-cost improvement. I suspect it would smooth out shifts between gears 1 and 2 anyway. On the stock freewheel, the jump between first gear and second gear is huge (see red and green below).

As I mentioned, the Rowbike 726 King is a faster bike than I expected - especially downhill. Mine is a “Dave Cam” version, which helps! 2006 or newer Rowbikes have the Dave Cam; 2005 and earlier do not (unless they are modified).

My point of comparison for speed is the Street Rambler (similar to Street Strider) outdoor elliptical bike, which I wrote about previously. Here is a quick comparison of the two bikes and their respective gearing. NOTE: For the Rowbike, this data is subjective and is very dependent on the length of your stroke.

As you likely realized, I am comparing apples to oranges. The Street Rambler in question has only 3 gears and the Rowbike has 7. Nevertheless, the higher gearing on the Rowbike makes it easy (and exhilarating) to fly downhill and cover lots of ground. I’ve found that I spend most of my time in 3rd or 4th gear on flats and slight inclines but have ventured up to 7th on downhill stretches.

Despite the Rowbike 726 King being a little too large for me, I am happy with the purchase. It is a blast to ride - an hour on the bike flies by.

Knowing what I do now, I might have held out for a Rowbike 720 Sport. BUT, I may have been waiting for a while to find one in my price range (and with free shipping).

The learning curve is steeper than my other weird bikes (like the Street Rambler and Kickbike), but after several weeks of rowling (1-2 hours per week), I am starting to feel pretty comfortable. I recommend following Rowbike’s guidance and learning in a large parking lot or other open space, free of obstacles. I managed to learn on my neighborhood streets (very minimal traffic) but had a few close calls (curbs, parked cars, etc.) and one wipeout.

It is too early for me to measure the fitness benefits of the Rowbike, but generally speaking, it feels less strenuous than the outdoor elliptical bike and the kick bike. That may be because rowing is not weight-bearing and because the Rowbike is more efficient (better gearing, less rolling resistance, etc.). No question that it provides a well-rounded, full-body workout though!

Do you rowl also? What are your thoughts and experiences with your Rowbike? Leave a comment if you are inclined - I am interested in other’s insights.