This is a little deviation from what I typically blog about; you may or may not know but I am a Disneyland fan. I recently learned that my grandparents took my mother and uncle to Disneyland one summer in the late 1950s or early 1960s. My late grandfather Sherman Moore captured the trip on film and I recently secured his slides. I have selected and commented on my favorites in this blog post.

Picture Perfect in Albuquerque digitized these slides for a very competitive price.

I was interested to see how Disneyland evolved over the years and see how things looked shortly after the park opened (1955). Based on a few data points, I was able to determine that this trip occurred in the summer of 1959 (my mother could not remember the exact year and the slides were not labeled). The mermaids basking in the Submarine Voyage attraction were the giveaway!

If you are interested in Disneyland history, vintage Disneyland photos, etc., I encourage you to have a look at these sites:

They were instrumental in helping me identify some of the attractions/scenes in the slides and they contain a wealth of interesting information. I thought I was well versed in the sights and attractions of Disneyland but I was wrong - this ended up being an awesome learning experience (and internet scavenger hunt). 1959 was a great year for Disneyland, marking the introduction of the Matterhorn, Monorail, and Submarine Voyage (among other attractions) - my grandparents, uncle, and mother chose a great year to visit. 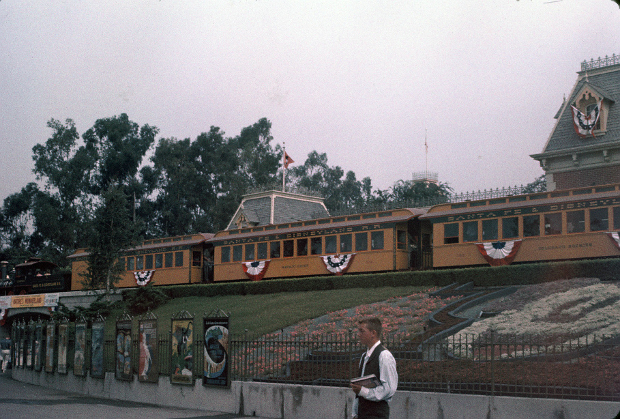 The iconic main entrance of Disneyland with the Disneyland Railroad boarding at Main Street station in the background. Floral Mickey is partially visible on the right. 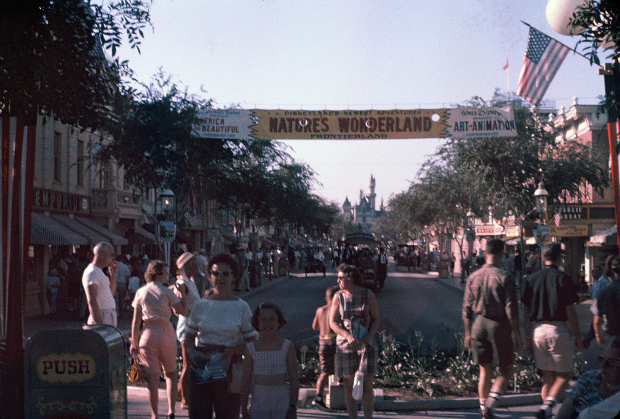 The Main Street stretch with a faintly visible Sleeping Beauty Castle, as viewed from the Town Square. A young Grandma Moore and Marsha (mom) are visible in the foreground (slightly left) and there is also a neat vintage trash can in the bottom left corner. You can catch a glimpse of the Main Street Emporium in the background as well. All in all, this view is very similar to what Main Street looks like today.

Nature’s Wonderland is advertised but since this was 1959, I suspect it is referring to the Rainbow Caverns Mine Train and some of the scenery therewithin OR the upcoming debut (1960) of the Mine Train Through Nature’s Wonderland. Please comment if you know the story here. 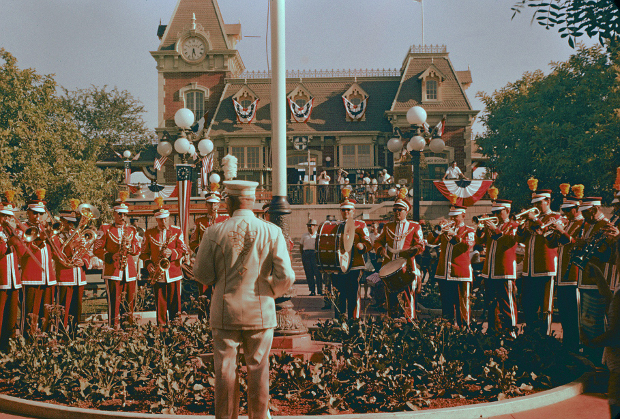 This is my favorite photo in the collection (in terms of quality) - the sharpness, lighting, and color are phenomenal. This is the Disneyland Band performing in the Town Square (near the Main Street Railroad station). The musicians of 1959 appear to be older than the college-age musicians that comprise the band today. Either way, I am sure they sound phenomenal; the Disneyland Band never disappoints! 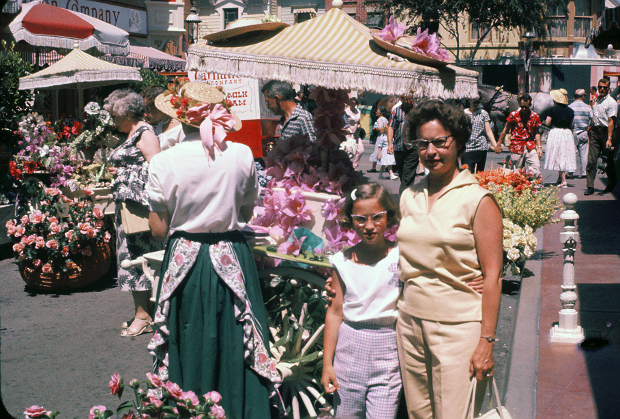 Here are Grandma Moore and Marsha at the Main Street Flower Market. A lot of interesting things were sold along Main Street in the early days of Disneyland, including plastic flowers. The Flower Mart was located on Main Street where the outdoor dining area of the Carnation Cafe exists today; that transition occurred in 1977 (the Flower Market occupied the space from 1955 - 1977). After 1977, the market briefly existed across Main Street (outside the modern day Market House/Starbucks) but eventually closed completely. 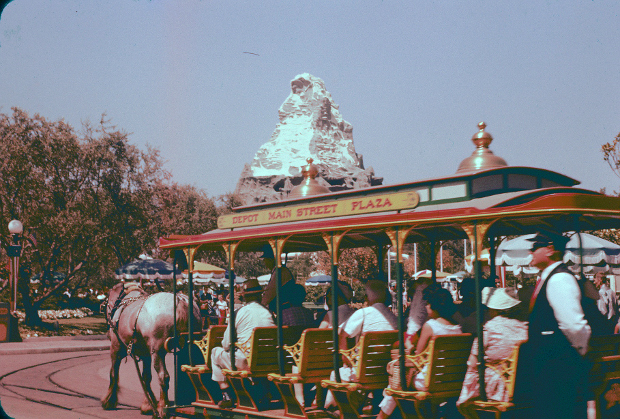 At the other end of Main Street, this photo shows a horse-drawn streetcar rounding Central Plaza. The freshly opened Matterhorn (debuted June 1959) is visible in the background. 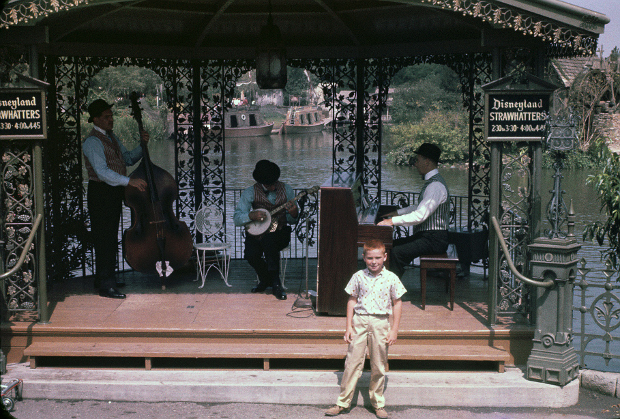 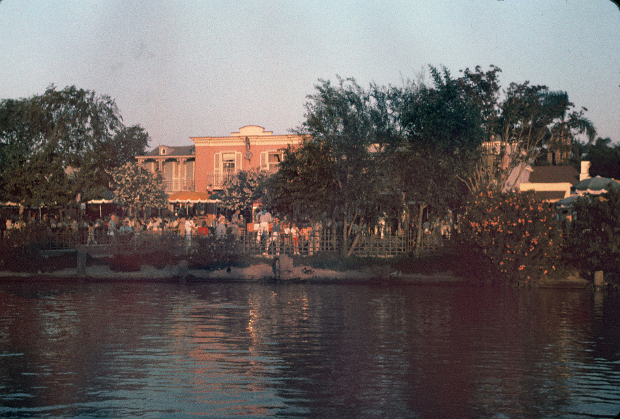 This is my favorite photo from the set in terms of subject matter; it is Don DeFore’s Silver Banjo BBQ restaurant on New Orleans Street as viewed from Tom Sawyer’s Island. Had I been on this trip, you would have definitely found me eating an $0.85 barbecue pork sandwich on the patio of the Silver Banjo BBQ. Modern day New Orleans Square is my favorite area in Disneyland (best restaurants, buildings, and rides) and it is interesting to see the roots (it began as “New Orleans Street” or “Old New Orleans” and was built up later when Walt had additional funds). The River Belle Terrace now occupies this space (more or less), and their BBQ pulled pork sandwich is delicious as well! 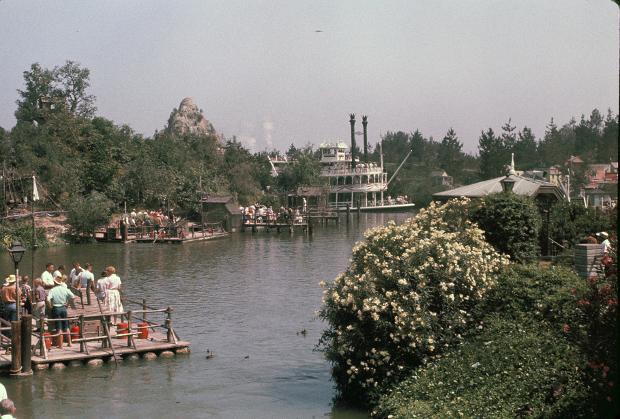 There is a lot happening in this photo. The loading areas for boats (ferry) to Tom Sawyer’s island are featured, along with the Mark Twain Riverboat approaching Riverboat Landing. The roof of the Dixieland Bandstand is visible on the right and you can catch a glimpse of the tip of Cascade Peak in the background. 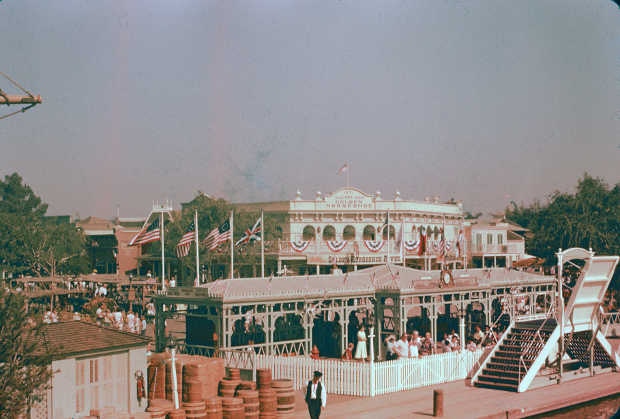 A nice view of the Golden Horseshoe and Riverboat Landing, as viewed from the Sailing Ship Columbia. The Columbia was relatively new at this point (only a year old) as it was introduced the previous year, 1958. The Mark Twain Riverboat had been in service since Disneyland opened in 1955. The loading ramp was the giveaway as to which boat this picture was taken from. 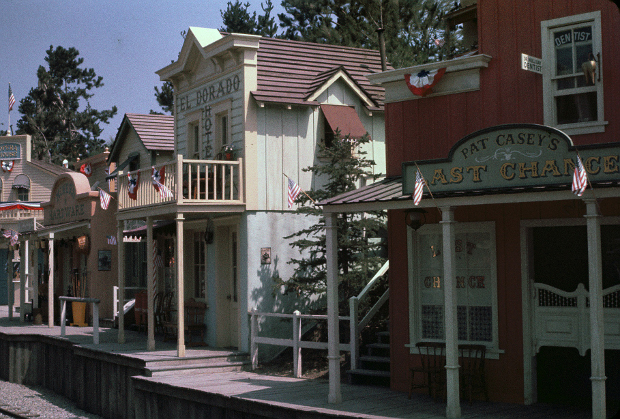 This photo captures some of the buildings of Rainbow Ridge along the Rainbow Cavern Mine Train boarding platform (technically, across the tracks from the platform). These include the Opera House, Miner’s Hardware, El Dorado Hotel, and Pat Casey’s Last Chance. If you look closely, you can see the Dentist’s office above the Last Chance Saloon. 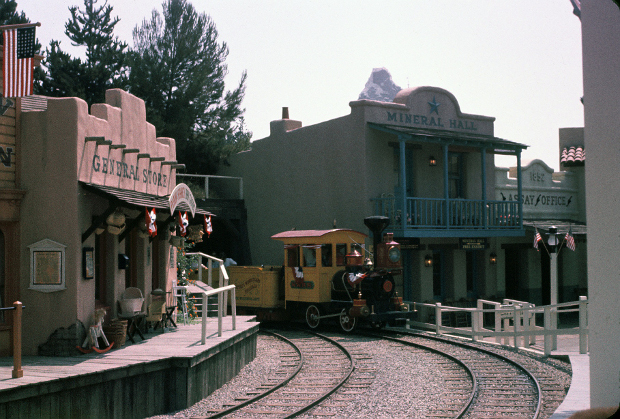 In this image, you can see Mineral Hall as the Mine Train rounds the bend to return to the loading area. This photo was also taken near (from?) the Rainbow Caverns Mine Train boarding platform. You can see a sliver of the Rainbow Ridge Clarion on the left, and the storefront of the General Store. For reference, the Rainbow Ridge Clarion was right next to Pat Casey’s Last Chance Saloon (see image above). Casa de Fritos restaurant, which originally occupied the space that Don DeFore’s Silver Banjo BBQ occupied (image above), was right across the courtyard from Mineral Hall but is sadly not visible in this photo. 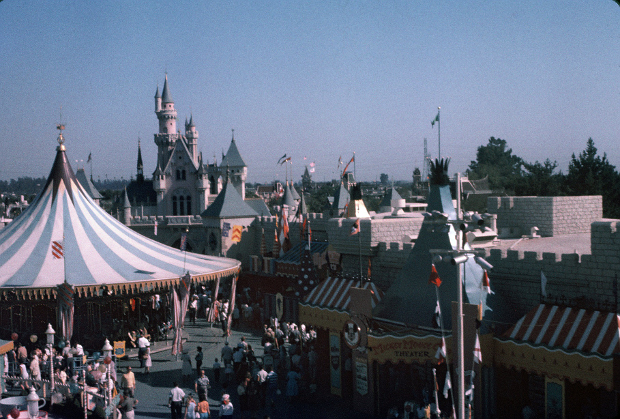 This photo captures an elevated view of Fantasyland (taken from the Skyway to Tomorrowland), including the back side of Sleeping Beauty Castle and the King Arthur Carrousel. The Mickey Mouse Club Theater is also visible in the lower right corner and you can see the edge of the Mad Tea Party in the bottom left. 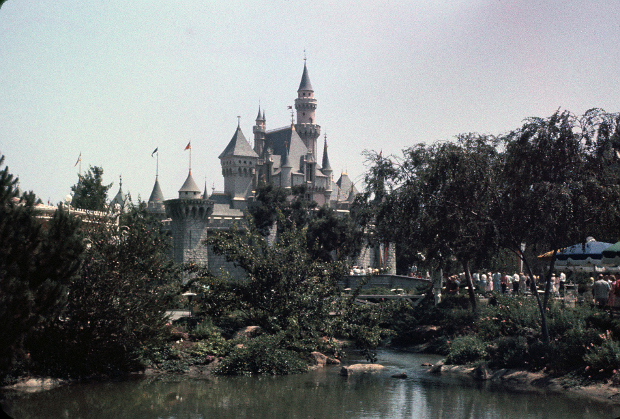 Here we have a nice, alternative view of the Sleeping Beauty Castle. I am speculating this was taken from the crossing between Central Plaza and Frontierland. 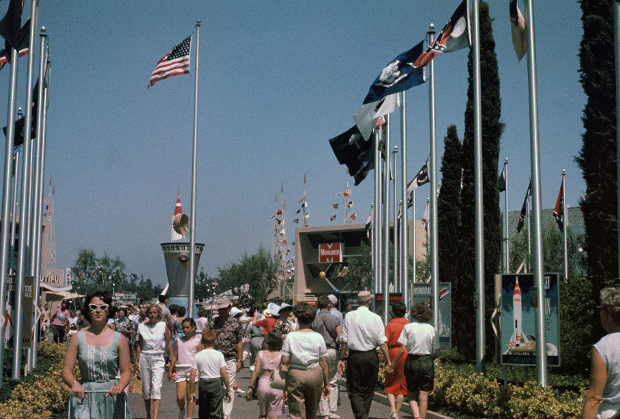 This photo captures the (busy) entrance to Tomorrowland. Lots to see here, including the Flags of the States, World Clock (center), TWA Rocket to the Moon (background) and Monsanto Hall of Chemistry on the right. The “America the Beautiful” signage is partially visible on the left as well. Sadly, nothing featured in this picture exists in Disneyland today - Tomorrowland changed quite a bit over time and the only remaining attraction from opening day is Autopia. 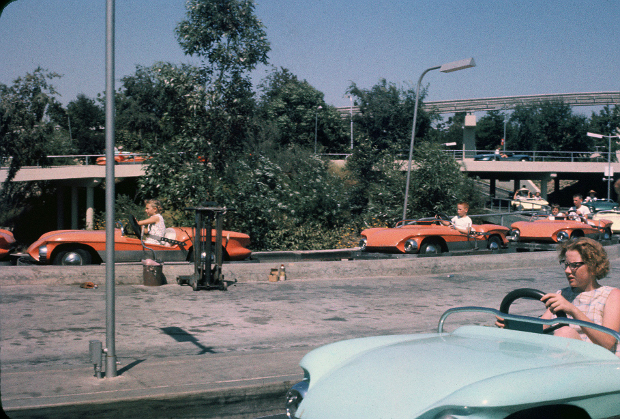 Speaking of which, here is the Autopia (technically Tomorrowland Autopia) loading area. There were multiple versions of Autopia in 1959 (Midget Autopia, Fantasyland Autopia, and Tomorrowland Autopia). Eventually, the latter 2 were combined to create the Autopia attraction of today (and Midget Autopia was removed to accommodate Its a Small World). If you look closely, a young Uncle Bob is visible in one of the orange cars. 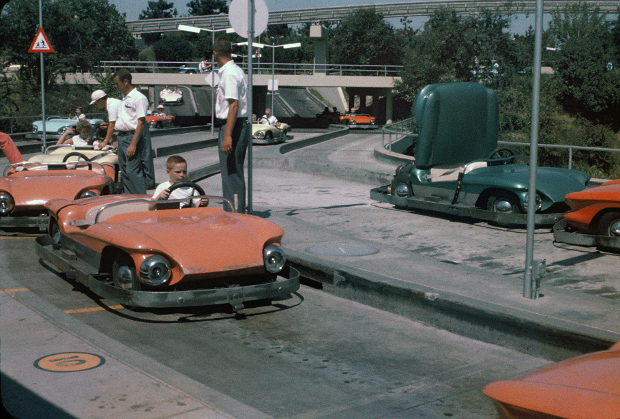 Autopia again - this one is a close up of Uncle Bob, the cars and cast members. The Autopia cast member uniforms of this time were much more subtle than the Autopia uniforms of today. 1959 marked the introduction of the Mark V (Mark 5) cars for the Autopia track - despite the cars being relatively new, you can see the wear on the hood of the car Uncle Bob is driving (hopefully not a result of his run around the track). 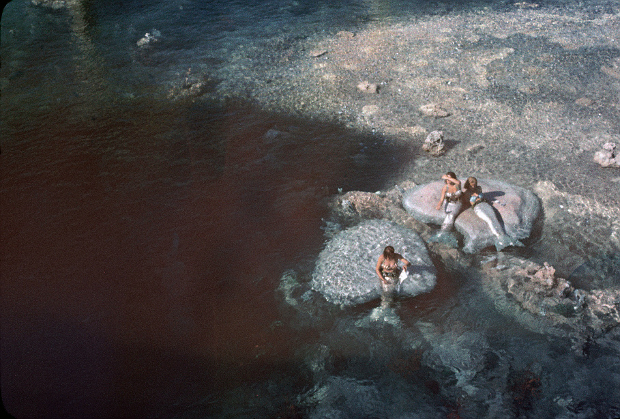 These next slides caught me off guard as I had never heard about live mermaids at Disneyland - in fact, I almost thought these were mixed in from another trip! The lack of context in this image made me more skeptical, but as it turns out, there were mermaids in the newly opened Submarine Voyage in the summer of 1959 and a few other summers in the mid/late 1960s. This photo captures 3 mermaids basking on a rock near the middle of the Submarine Voyage lagoon. 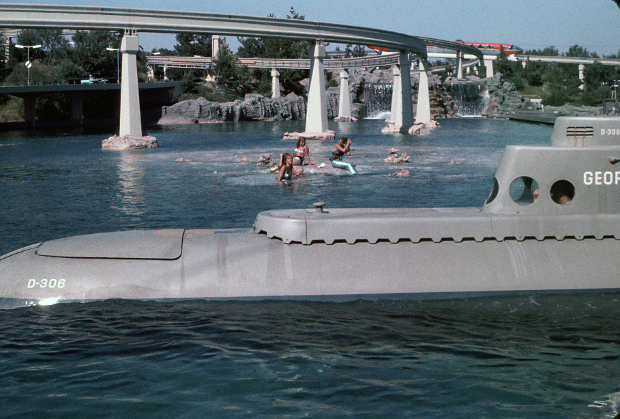 This photo captures 3 other mermaids in context (with the George Washington sub in the foreground) in the middle of the Submarine Voyage lagoon. Although the mermaids only appeared 4 summers total, the Submarine Voyage ran until 1998. After a remodel, it now operates as the Finding Nemo Submarine Voyage. You can catch a glimpse of the Monorail in the background as well. 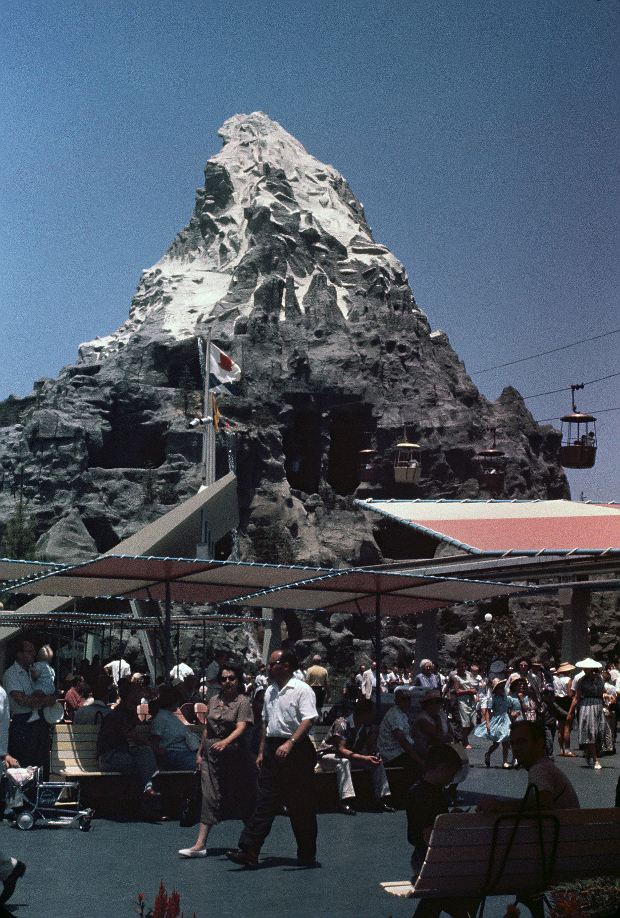 Here is a nice shot of the newly opened Matterhorn and the Skyway through it. I speculate this was taken near the edge of the Submarine Voyage lagoon (looking toward Fantasyland) but I am not 100% sure. You can clearly see the holes in the mountain that the Skyway passed through until it was closed in 1994. The Skyway used this original, round style of bucket (carriage) until 1965.

Hope you enjoyed this Disneyland blast from the past. If you are interested in full size versions of any of these photos, let me know in the comments and I am happy to share.